Comely Darwisa Samdani, 40, is gentle and soft-spoken, belying the qualities of daring and decisiveness that have brought her business ventures far and wide, literally and figuratively, since she took out her first P4,000 loan from KCCDFI in 2007.

Unable to proceed to college due to poverty, Darwisa married early at 17, the union producing her only child, now newly graduated from criminology. Her husband left for Malaysia in 2004 but, by then, the couple was estranged because, Darwisa says, she “cannot accept polygamy”. Darwisa later met and married Haier Samdani, captain of a fishing boat.  Haier started the sale of small charcoal packs with driftwood in Sibugay converted into coal and sold at P150 per sack in Zamboanga City. With her first KCCCDFI loan, Darwisa expanded into selling cooked food and opening a small sari-sari store on the side. For two years she also engaged in buy-and-sell of scrap metal and empty plastic containers.

In a few years Darwisa shifted to more valuable marine catch such as mulmul  (parrot fish), lapu-lapu (grouper) and most highly-priced of all … sea cucumber (called balat  by locals, a Tagalog term), as well as shells of mother of pearl. She offered higher prices ensuring a steady supply from fishers in nearby barangays. Dried sea cucumber is a top delicacy in China especially among its burgeoning middle class. Fresh sea cucumber sells at P1,800 per kilo, rising to P3,000 per kilo once dried after a 1-2-week drying process.

With a P40,000 loan from KCCDFI in 2010 Darwisa focused on sea cucumber and expansion of her dry goods store.  Although lucrative, she stopped the scrap buy-and-sell business in 2012, her energies increasingly drawn to the store (e.g. selling shell for crafts and, later, provisioning the fishing boats) and the building of fishing boats.

The prized marine catch inhabit coral reef and are caught either by hand or fishing spear. (Sea cucumber is also found among sea grass or on the sea bottom and can be cultured.) Scaling up of operations needed having one’s own fishing boat.

Darwisa’s loans have increased over the years. Darwisa and Haier built their first fishing boat or motorized banca in 2011 at a cost of P85,000 which included two 16-hp engines (one as reserve). Subsequently they had a new one built yearly and now have a fleet of six motorized bancas. The older bancas have been sold off mostly to kin and in-laws, many of whom work on the fishing boats. Each boat has a team of four including the machine operator and two buseros (divers). 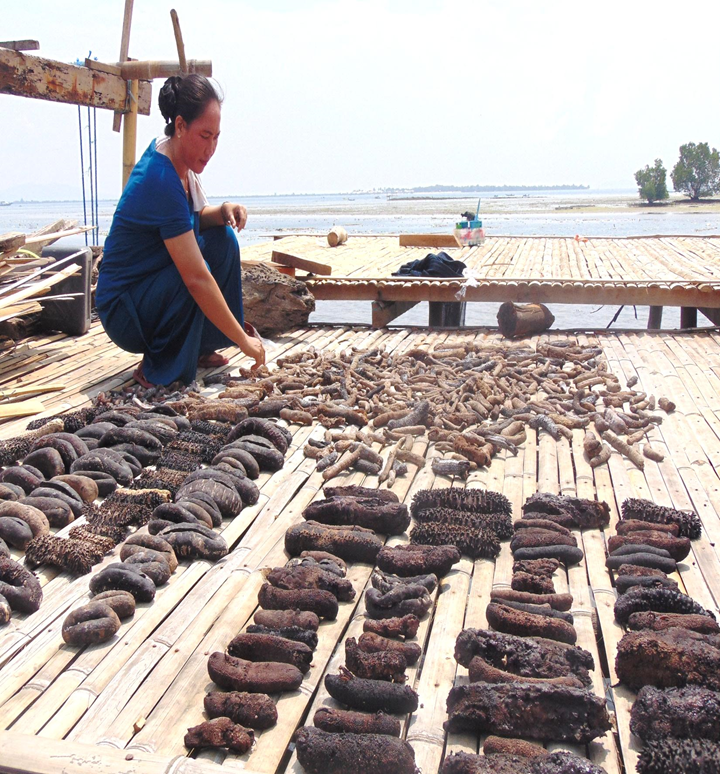